This is a simple chest harness that is great for the bottoms out there who can't have rope on their upper arms. I like this tie because it's a variation on the classic box tie with a reduced chance of nerve damage since there isn't any rope around the upper arms. The arms are still secure behind the back, it's comfortable, quick and looks pretty sexy. Have fun with this one!
Posted by Innovative Fiber Arts at 3:50 PM No comments: 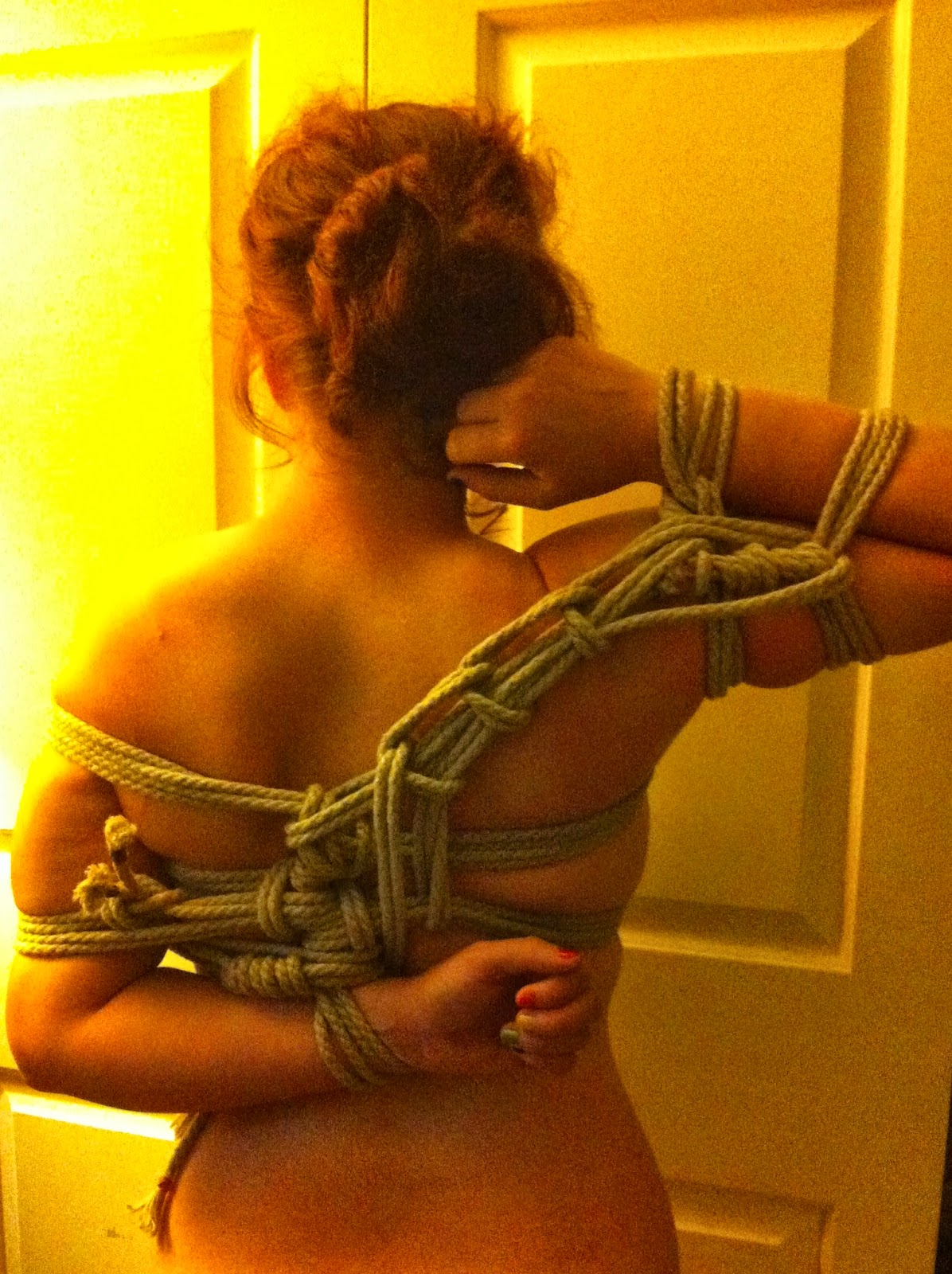 This blog was set up to be a valuable resource for the rope bondage community. We wanted to provide people who attend the Innovative Fiber Arts events a way to help remember the ties we went over during class and a way for folks that weren’t able to attend to keep up with what we have been doing. So far we have really put our emphasis on the technical skills of tying safely and effectively. While these are all very important and valuable, one thing that we haven’t emphasized a great deal yet is intention and connection with rope.

Rope is an excellent means of communication between two people who are engaging one another on a more intimate level. It can be a quick and dirty tie to let someone say “I want you”, or it could be a very complex and beautiful tie that will allow a bottom to dance in the air. Rope can be used to challenge a bottom physically and mentally but just as easily used to show comfort, love, and support. Although many of the ties used will be the same, the most important factor that determines the dynamic of your scene is often the intent with which you engage your play partner.

Intent is defined as “intention or purpose”. It is the plan that you have for anything you do. You can go to the kitchen in the morning with the intent of making breakfast. You have a pretty clear idea of what you want to do - an aim, a goal. Sometimes when you start to make breakfast, you know exactly what you want to do, what ingredients you'll use, and what steps you'll take to make it all come together. Other times you just go down to grab something to eat without any real game plan. The same thing holds true when you are going to do rope bondage with someone. You may or may not have the perfect plan laid out, but you should definitely have some idea of where you want it to end up.

A critical aspect of intent is communication. To get the most out of their scene, tops and 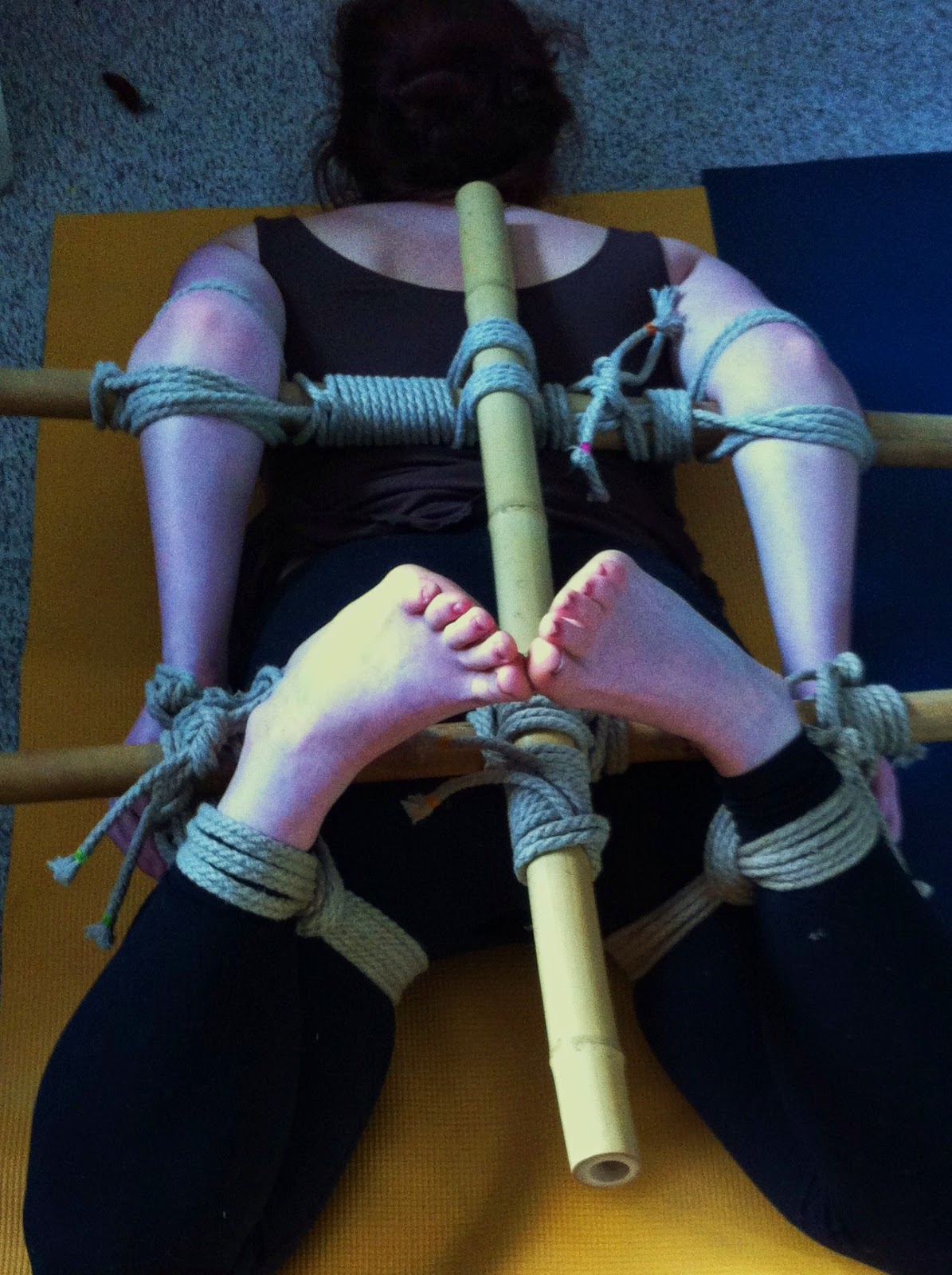 bottoms need to come to some agreement about what they would like to do together. This could be a conversation held just before the ropework starts, or it could be a long standing agreement between long term partners. Either way, there is an open dialogue between two people about what will go on. Even long term partners should have a “check in” before starting a scene since we can all feel different from day to day depending on outside circumstances. If two people aren’t on the same page about what they want out of their scene, then things may not end up where they both wanted it to. Essentially talking with your rope partner will lead to better and hotter rope scenes, and what you both talk about together is the intent of that scene. 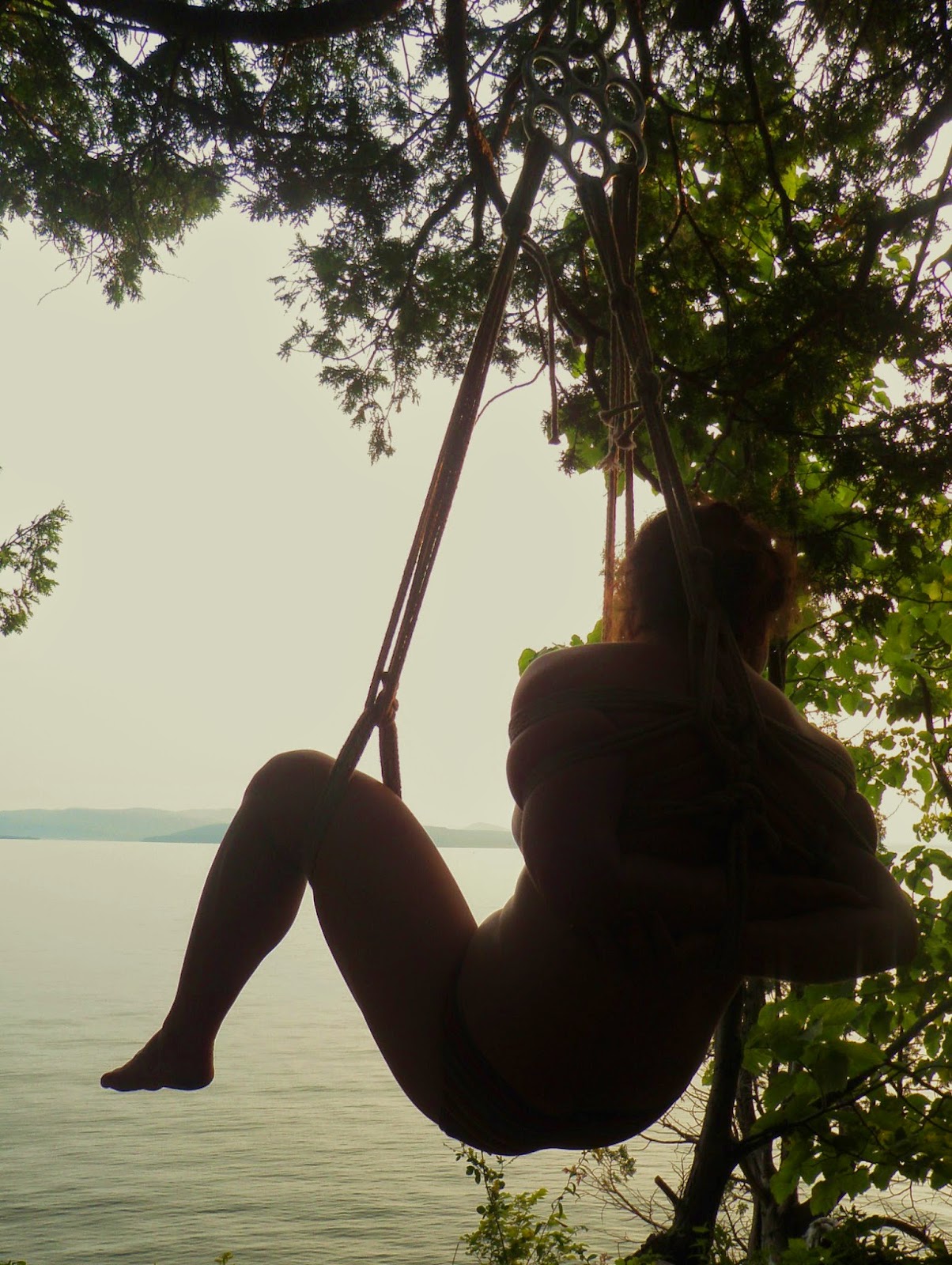 Intent may take on many forms. Sometimes you just want to say to your partner “tonight I want to practice some things that I have been wanting to learn, so I will probably tie the same thing several times.” It’s not super sexy, but it can lead to super sexy times down the road (a quick side note, consider putting on a movie or music for the bottom so they don't get bored too quickly during these practice sessions). Doing silly rope play where you are both laughing is a fun and light way to introduce someone new to rope. And of course, the list of goals for rope scenes goes on and on: rope as punishment (well placed knots are really mean), rope as decoration for a party, rope to restrain, rope to expose. The key element is to have a purpose to what you are going to do. And that can change over the course of the scene, which can be a whole lot of fun. Just think about what you want to do and communicate with your partner during the scene.

Let’s look at a couple of possible scenarios:

Scenario A: UberDom has set up a play date with sensitivegirl. UberDom is planning this really serious tie that will put sensitivegirl in positions that he has always dreamed of doing. The ties might be a bit painful and will show off his rope skills as well as show what a manly dominant he really is. He is meeting sensitivegirl for the first time, and she has had a rough week. She has had a fight with her best friend, and her puppy has been sick. She wants to be tied in a very nurturing and caring way. They meet up, don’t talk, and get down to business.

Scenario B: ShibariStan and BetsyBondage have been partners for a while. They have set aside time to do some rope together, and they are quite excited about it. Stan wants to put Betsy into some new harnesses he has been checking out on the IFA blog and then see where things go. Betsy is feeling a bit feisty and wants to have someone “put her in her place” with rope. They set aside half an hour to grab a light snack and a coffee before playing. The two of them agree that Stan will do some rough and tumble floor work that will help take a bit of “the fight” out of Betsy and try to incorporate the harnesses into that play. They both think that sounds hot and get down to business.

Which of these two scenarios has the best possibility of working out? Stan and Betsy are probably going to have a great time while sensitivegirl is likely to have some less than positive things to say about UberDom. The key difference between the two scenarios is whether or not a shared intent was negotiated between the two people involved in the scene. Most times you can talk with your partner and come up with something that will work for both of you. Other times, you both may have very different goals for what you want to accomplish. In those (hopefully rare) cases, it can be best to hold off until you are both more in agreement with one another.

What does all this communication about intent ultimately lead to anyway? With any luck it will lead to a better, stronger, and deeper connection with your partner. It builds trust and respect between the people playing with one another. Within the kink community, trust and respect are key elements in everything that we do and are particularly critical for keeping our play consensual. When trust and respect are built upon, scenes get hotter and more challenging, and new opportunities present themselves as you  connect on a deeper level with your partner. 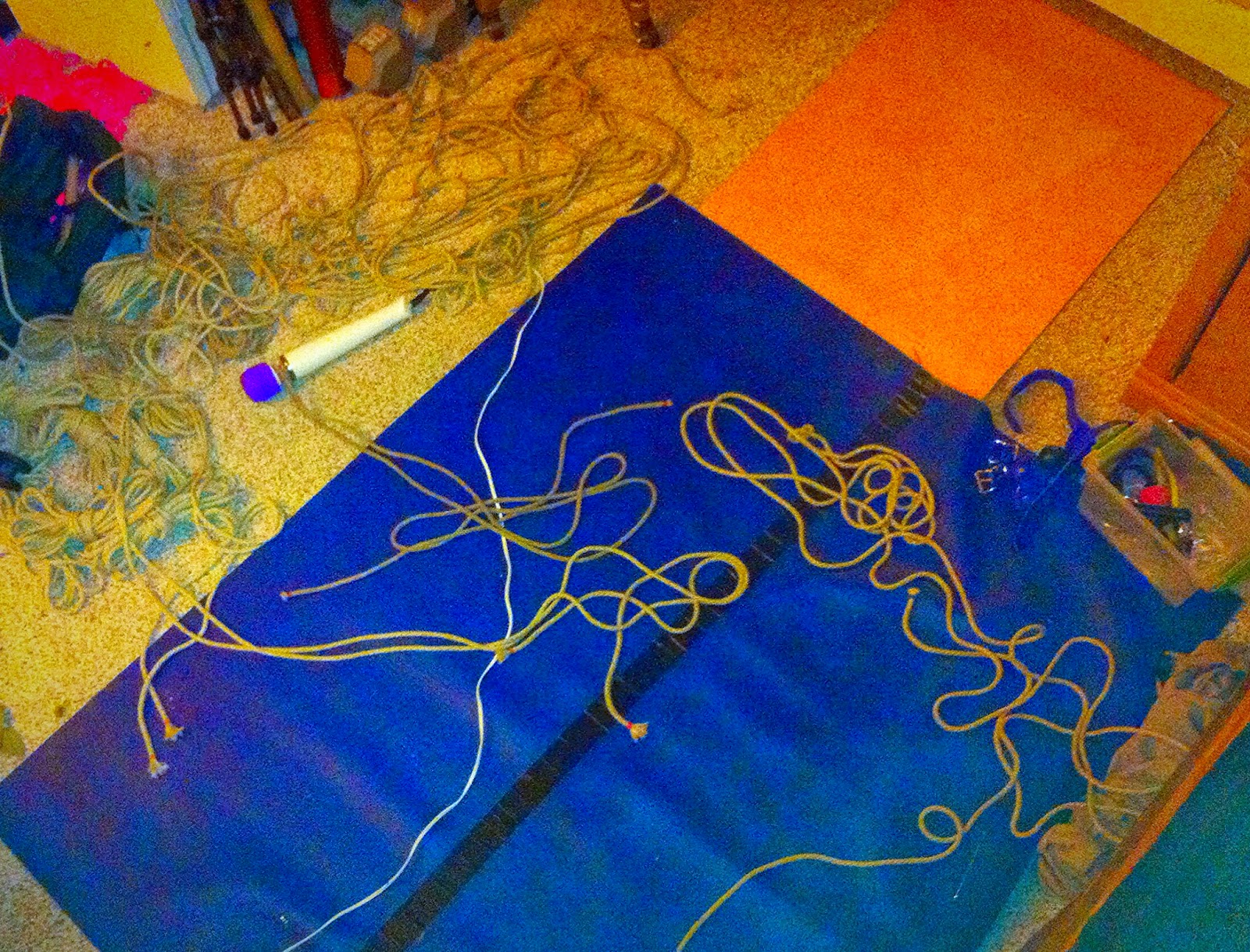 Intent is really a critical part of rope bondage if you want to become a “hot shit rope top” (as Midori likes to say). Think about what you want to do, communicate that with your partner, and use it to build that trust and respect which deepens the connection between you. Who knows, it might even help you to get laid now and then…


Here's another classic Shibari tie known as the Ebi or Shrimp tie. This can be challenging for rope bottoms especially if they aren't as flexible because it folds them in half. The danger with this tie is that it fatigues the diaphragm over a prolonged period of time and can lead to your bottom passing out due to lack of oxygen. Just like with any rope bondage you should never leave your bottom unattended. In this video I walk through the steps to create the ebi, the precautions that should be taken and how to use this tie during a scene. Enjoy!

This week we take a look at the always stressful Strappado harness. This is a challenging and restrictive tie for bottoms, so be sure to keep open lines of communication going while playing with this one. The main point of stress tends to be the shoulders, so you'll have to limit the tightness of this tie based on your bottom's flexibility.

In addition to the usual nerve compression issues associated with ties around the upper arms, the Strappado introduces an extra element of danger because we tend to over-stress the shoulder joints when lifting up on the tied wrists (as is the typical application for this tie). In order to protect your bottom while playing, be sure to either secure the band around the upper chest to a hardpoint prior to lifting the wrists or alternatively kneel them forward over a chair, bench, or footstool if no hardpoint is available.

Despite the hyper-focus on safety I present here on this tie, be assured that it is really quite fun, challenging, and hot for both top and bottom. So get out there, strap on a Strappado, and crank up the volume!

P.S. Here's a link to the Sheet Bend (for extending rope) in case you need it and also a link to the Figure 8 Double Column Ties post that I referenced in the video.
Posted by Innovative Fiber Arts at 11:22 AM No comments: